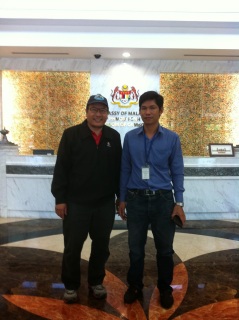 We arrived around 7 am in the morning. The airport was small just like the one in KB maybe less glamorous than that. It’s simple and quiet. The immigration and custom checks were brief and we were out  and ready to go less than half an hour from the time of our landing. Outside the airport saw the chaotic morning rush just like ours; the only difference is the presence of police and the army personnel. They’re everywhere and made the trip more stressful. We went straight to the Malaysia Embassy  for a 9 o’clock meeting. It was a huge compound and majestic building; made you so proud for being a Malaysian citizen. The briefing was short but very useful in terms of security issues and emergency cases. I mean this country has gone through years of war and tribulation; we do not know whether they are ready to accept us as a foreigner on their land. I know a lot of Cambodians back in Kelantan or Shah Alam but the locals here are a bit different. They are mainly Buddhist and very religious at that. Next we went for lunch at a halal restaurant and solat at the nearby mosque. Later in the afternoon we went on a slow boat down the river and watched the sunset. Then off to our hotel somewhere in the city to get a lot of rest as for tomorrow we will have to endure a 3-hour ride to Kg Cham. 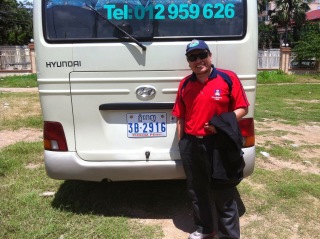 The road to Kg Cham ran through a lot of kampongs. I mean really kampong; like our kampong in the 70s. The roads were dusty and many parts left unfinished. It was early morning and people were rushing not to work or offices but to the market place. We passed through many market places just like the ones we still have in some of our kampongs.  People sitting around having breakfast, talking , chatting and negotiating. A scenery I used to be part of during my childhood. Not many schoolchildren running around; they maybe already in the class or haven’t yet leave their houses. But every where you look you will see people living a hard life, struggling to make the ends meet. We drove on to our destination; the traffic was not bad as no vehicle really  on the road. We finally arrived in Kg Cham around 10 am to the cheering of children and the kampong folks. They were waiting for us. 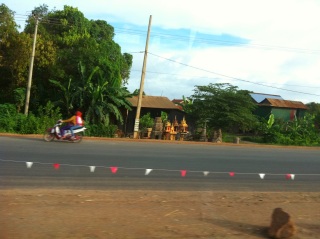 Although these folks have no modern amenities but they have unbelievable hospitality. Maybe we cannot communicate directly but the gestures and body language are good enough to make yourself feel at home. The kids played basketball  cheerfully although they had no real court, or real basket ball or real basket. What they had was a ball, a handful of players, a basket ( I mean laundry basket) and a field full of fun. A quick visit to the compound of the school showed how much they have tried to educate the children and the people around them. This is the effort of a few people to educate their children about Islam and practices in Islam. The innocent eyes of the small children showed us how much have I got to help them out. We could turn a blind eye on them today but the guilt for doing so would come to haunt us tomorrow and the rest of the other days. My students and I just could not do that. We would give whatever we have for them today and hope to come again in the future. When I saw the old folks with beaten faces and a hard smile; my mind went back to my aunties and uncles that died some years ago. They had the same faces and the same smile; the smile of the poor. 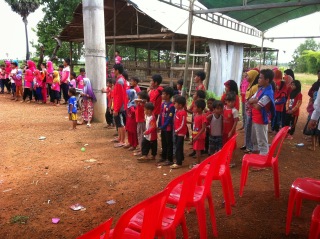 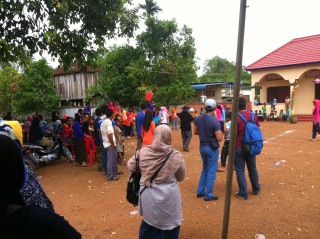 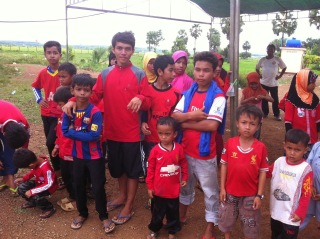 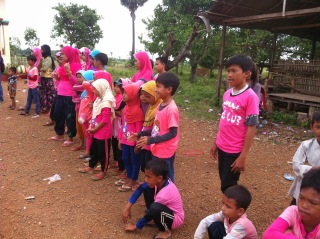 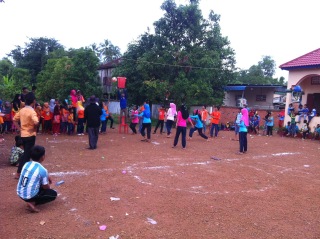 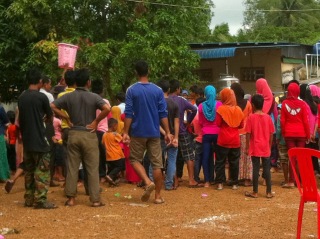 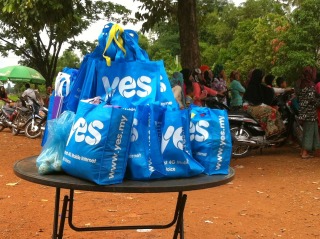 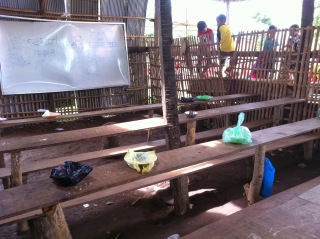 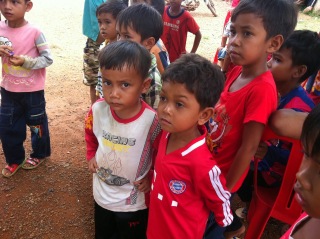 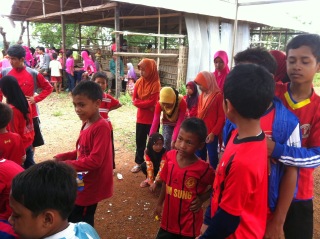 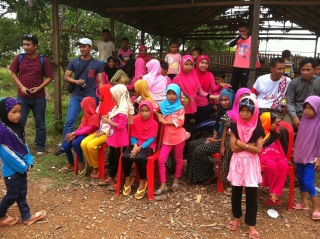 Lunch was served late in the afternoon and it was unbelievably superb tastes of delicious kampong cooking. I hadn’t had such a taste for a long time from the yesteryears of my childhood. It was really good. We finished the program there and rushed to the border before it closes for the day. We were heading east to the troubled place of the past , Vietnam.