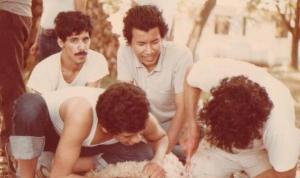 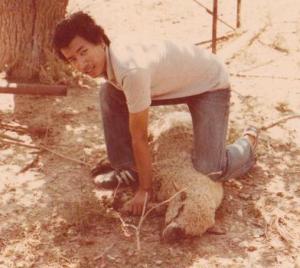 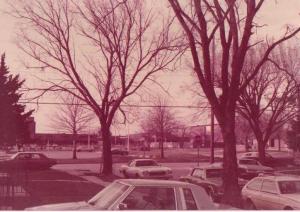 The view from my front door ! WSU campus was just across the street.
I am supposed to finish up my programming today about my research but you know I just feel not in the mood to do anything academic today. Well actually it has been for the last two weeks I think; the laziness has overtaken the noble intention to produce an award winning research product that will save the world from something…. But as I sat still in front of my half written screen my mind set off to the far far away land that I used to live and used to wake up to the glorious summer sunshine. Wichita looked like home in the summer only hotter. The wind blew in the heat as if you put your bare ass in front of the hot oven. So we spent a lot of time outside the house because most of us could not afford an air conditioner. In the summer we would go around the farms looking for lambs. Since halal meat was so difficult to get some of us would go and slaughtered the lambs ourselves. The farm owners would always be stunned with the way we handled the animals. But as we explained that this is our way then they would leave us alone. “tell me once you guys have finished, I’ll be out front” he would say as he left us, maybe disgusted or something. Actually he would be in a lot of trouble if somebody find out about this as it is illegal to kill animals without permit in America. I slaughtered a calf once with my friend at the back of a farm way outside Wichita. The farm owner came to us with a big hammer. “what is that for?” I asked him “ to kill that little cow, of course” he said. Usually he would hammer that thing down before he cut out the meat. I explained to him how we are gonna do it. “Okay whatever you say boys” he shrugged and threw the hammer to the corner of the barn. I think we worked on that calf for about 2 hours; took us sometime because we did not how to skin it properly. 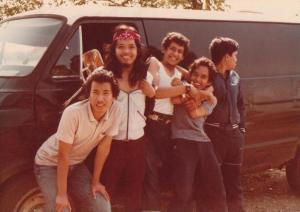 The trip was always exciting—summertime fun. I’m the one with the ass-face look (leftmost).
But getting halal meat was always a priority to us and alhamdulillah we managed to get it eventually. During thanksgiving time we would go and get some turkeys (ayam belanda) and that would last a week or so. Sometime we had to travel all the way to Kansas City to buy some halal meat; or the nearby Stillwater Oklahoma for halal chickens. To resort to non-halal meat was really an excuse. Towards the end of my stay in Wichita the local supermarket had stocked some frozen chickens and were labeled “halal”….but we stayed away from ‘em because we did not really trust these people. Seafood was really expensive as they came in frozen so we did not get much of fish, crabs or anything like that. We bought some dried sotong once from a Thai store and that didn’t do anything good to us as we did not know how to cook them. Speaking of cooking, that’s really a big challenge. Most of us did not know how to cook but at the same time we did not eat outside; so the solution is to take turns and do whatever you feel like with the meat or chicken. As long as it is “eatable” we just swallowed it down. At first it did not work out well because some of the cooking just “not meant for human consumption”; but after a while we get used to frying chicken without burning it. So it was okay.

I learnt how to make curry so every time it’s my turn to cook then it would always be curry. Since santan wasn’t there; I used tomato paste instead. Now it is my favorite dish to cook curry with tomato paste. Quite delicious, you know. OK time to go now. Tomorrow I will come back and stare at my half written screen again hoping for the program to finish. Hopefully the mood will get better; otherwise I will tell you another story !